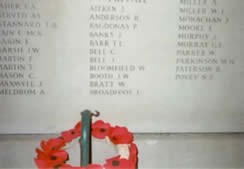 There is a privately owned museum here, open all year during daylight hours. Trenches, underground bunkers, battle artefacts and weapons can be seen. There are souvenirs and books for sale and there is a café offering drinks and snacks. 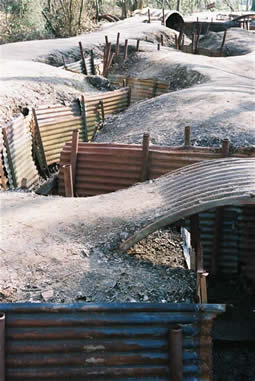 This park covers more than 80 acres, about half of which formed the sector of the line held by the Royal Newfoundland Regiment on 1st July 1916. In the initial attacks of that morning the regiment was wiped out. At the entrance to the park there is the 29th Division Memorial, and surrounding it you can see the grass-covered trenches of the battlefield. They have been preserved just as they were left in 1918, and the park is one of the best preserved trench memorials on the Western Front. It is dominated by the Caribou monument, at the base of which is the Memorial to the Newfoundland Missing – of whom about 8,000 are listed on the bronze panels. The monument stands upon a plinth of stone around which is an orientation table from which you have an excellent view of the entire park and the countryside beyond to Beaumont and Thiepval. From here, using the Orientation table you can distinguish the opposing front lines, with the petrified ‘Danger Tree’ in no-man’s land between them.

Here we will have the opportunity to walk around the battle area. A good deal of battlefield debris still remains in the shell holes: helmets rusting away, shell cases, barbed wire and the iron pickets upon which it was hung. These relics are not there for the taking; they are there to be looked at. Items are still being found, shells and hand grenades are still finding there way to the surface of the well-kept grass, and if anything dangerous is seen it should not be touched, but reported to the Superintendent or to one of the gardeners. 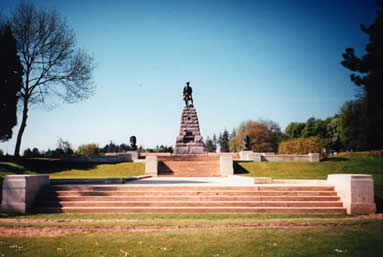 Thiepval was once a thriving village but is now more of a hamlet. By the end of 1916 it was a ruin. The Germans made it in to a fortress, and its capture was vital if the British were to make their breakthrough. The ridge on which Thiepval stands was finally taken by the 51st Highland Division in the late September of 1916, after desperate fighting with heavy losses on both sides.

In Thiepval itself stands the great Memorial to the Missing. Designed by Sir Edwin Lutyens, it is built of brick with stone facings. The central archway, flanked by smaller ones, rests of sixteen main pillars. The effect is extraordinary, and the edifice can be seen from miles around. On the monument are recorded the names of 73,412 men who died in 1916-17 and have no known grave. Behind the memorial is a cemetery where equal numbers of unidentified British and French soldiers lie buried. Opposite the memorial is another to the 18th Division. This area is the site of what was once Thiepval Château, and later Leipzig Redoubt, another strongpoint in the German defences. 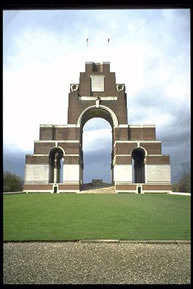 All this area saw heavy fighting in both 1916 and 1918, and there are several cemeteries and memorials. The wood itself is approximately half a mile square and irregular in shape. Half-way through July it was the scene of fierce fighting when the South African Brigade went into action for the first time. One tree situated just behind the memorial, its trunk full of shrapnel, survives from the original wood and is tended by the Commonwealth War Graves Commission. Battle debris, too, can still be found here. The wood has been thoroughly rehabilitated and all the glades have signposts at their junctions, so it is a simple matter to follow the course of the battle that raged here in the latter half of July 1916. 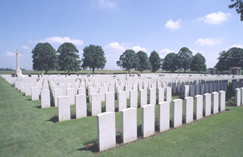 Langemark was captured by the Germans during the first gas attack in April 1915, and retaken by the British during Third Ypres. When the allies withdrew in Spring 1918, the Germans occupied it again. Finally, the Belgians took it at the end of September 1918.

The German cemetery has two small rooms at its entrance. In the one on the left there is a Visitors’ Book and a relief map showing past and present German cemeteries in Belgium. In the other room are oak panels upon which are carved the names of the missing. The cemetery is in two sections: the older part contains 10,143 graves, of which 3,836 are off unidentified German soldiers; in the newer part 24,834 men are buried in a mass grave in a fairly small area covered by shrubs. Watching over them is a bronze group, which represents their mourning comrades. On the boundary walls are inscribed the insignia of the student battalions that served in the area. At the northern end of the cemetery are three concrete bunkers with linking memorial stones indicating the position of the Langmark defensive line. There are 9,475 men buried here; and in all, some 44,000 burials are recorded. 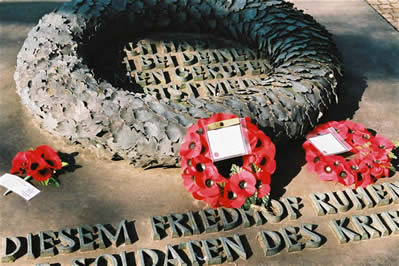