At the end of our three-day trip, we asked the pupils to fill out a questionnaire. Pupils respnded to questions on the best, worst, saddest and most surprising things about the Battefields tour. Here are some of their comments…

“The whole trip was amazing but in my eyes the best part of the trip was the Hotel and Hill 62 on the last day. The Hotel accomodation was amazing, especially Miss Dacey’s lighting during the Disco! Hill 62 was a chance for me to imagine what life was like in World War One. Having the chance to walk through dug-outs and trenches was amazing and so much fun.

The saddest thing by far was the harsh reality of just how many people died during the War. Visiting the graveyards and memorials showed not just the way but also the rate at which people died. Listening to the Last Post under the Menin Gate at Ypres proved to me just hown horrific the war was. Whilst the music was playing I looked around at the shocking amount of names of missing men inscribed on the walls, and then it hit me, I realised just how lucky I am not to have had to fight in the Wars and to still be alive today.

I was horrified by the thought of hearing the whistle, signalling the charge at the Germans, knowing that I probably wouldn’t make it to the other side. I found it amazing that I could imagine being there at the time, walking through the trenches.”

“For me the best thing was Hill 62. It was the closest experience you were going to get if you wanted to know what the trenches were like in the Great War. It was unbelievable to think that anyone could last two hours in the conditions, let alone two months! I also enjoyed visiting F.E. Clarke’s grave as he came from our school, which made it more personal so it was great.

When you actually start to piece together the amount of lives that were lost it is terrifying. I find it hard to imagine all those deaths in one graveyard, but they were everywhere. I think all the memorials were brilliant as it can never be truly expressed how much respect these soldiers deserve.

I was disappointed that I didn’t research whether any members of my family were buried in the cemeteries. I found quite a few people with my surname and even though there was only a slim chance we were related, it would have been nice to know if we were.

The most surprising thing was definitely the endless graves and lists of soldiers who lost their lives for their country. Even now I can’t take in the amount of deaths, but it has been a real eye-opener as I hadn’t appreciated the sacrifice they made until now.”

“The Last Post was really sad and I actually cried thinking about how just one poppy could represent the hundreds of thousands of soldiers who died. I also thought about what it would feel like to watch my friends die and what the families would be going through. I thought about how I could never understand or cope with this situation if I had been there.”

“I think that the best thing was going in the trenches and seeing the living conditions of the men who had fought in there. The saddest thing was seeing how many people died, especially as the majority of them were really young. I was pleasantly surprised at how well kept the graves were.”

“Going to Hill 62 made me realise the reality of how dirty the trenches were. I really enjoyed going in the trenches, it was the main highlight of the trip. The saddest thing was the amount of graves we saw. They made me feel bad because they were so big and it put the reality of war in to my mind.”

“The best thing was going to the Last Post in Ypres. It was great becuase there was a real atmosphere with it being St. Patrick’s day. Visiting F. E. Clark’s grave and listening to the poem were the saddest thing about the trip. The most surprising thing was the number of cemeteries as I did not expect to see such a vast amount. It made me realise just how many people died, more than just numbers on a page.

“I think that Hill 62 was the best part of the Battlefields tour because I thought it was very interesting to see all the artefacts in the Museum that had not been altered. I also enjoyed going in the trenches and getting really muddy!

The saddest thing was seeing the graves of people who were related to us. I did not find any graves with my surname on, but I did find graves with my friends’ surnames and someone from my school who had fought at the Somme, which made me sad.

The most surprising thing about the Battlefields Tour was finding out how many people died and also how many were still unknown and/or missing. Seeing everyone’s graves made me very upset.”

“The ceremony at the Menin Gate was the saddest thing. The Last Post was very emotional and many people cried thinking about and remembering the people who died in the war.

Seeing just how many people died during the war was a bit overwhelming.”

“The trip was very interesting and helped me understand a lot more clearly the history lessons we’ve been having recently. My favourite place was Hill 62 and the Trenches because they were really lifelike and you could walk through them.

The saddest thing was the amount of soldiers who died at the very young age at which many of them died. Seeing the large number of cemeteries and how far apart they were helped me to realise just how much of an impact the War had.”

“Going in the trenches and through the tunnels in Sanctuary Wood were the best thing. I thought the museum was good because there were so many things that had been dug up. I liked the fact that the trenches had not been touched and had been left they way they were in the First World War.

The saddest thing was seeing so many graves. On our way to France I thought ‘oh it’s just graves, people died’, but then when we got there I was really shocked seeing just how many people did die. I was amazed at how horrific it was and how it made me feel.”

“The thing I found the saddest was listening to the Band play at the Last Post as earlier that day I had found my great great grandfather’s grave.”

“The best thing about this tour was seeing all the preserved trenches at Hill 62. While I was in the trenches I was imagining the soldiers who stayed there. I also liked the Last Post ceremony, which was an opportunity for us to pay our respects to the soldiers who died. We were also able to show our respect for the Veterans from the Second World War who were there to lay wreaths at the Menin Gate.

The worst thing that I saw was the huge mass grave at the German Cemetery. I didn’t like thinking that there were hundreds of bodies in a hole in the ground that had just been covered with earth and had a load of bushes planted on top. The soldiers who had been brave enough to go to war all deserved respect, no matter which country they came from.

The thing I found most surprising was seeing the names of people from our own school who had fought in the war. Before this trip I didn’t think of the war in terms of individual people fighting against the enemy, but I do now.”

“The best thing was having the freedom to walk around the places we visited with whoever we wanted and at our own pace. I liked the visits, such as Hill 62, although I found some of them a bit disturbing.

The saddest thing was walking around the trenches and seeing some haunting images of war in the Museum.

I was most surprised to learn about the wounds that people could get during the war. For example, we saw an image of a German man who had half his face blown off. I was also surprised to see how happy some of the soldiers looked in the pictures when they must have been going through hell.”

I was most surprised by the amount of graves and cemeteries that were to be found across where we travelled. It really did surprise you just how many there are.”

“The saddest thing was seeing all the graves and the sickness of the mass burial at the German Cemetery, because it really sinks in about the tragedy of the event when you see the number of graves and can see your relative’s names.

The worse thing was that it was quite a short trip and was over so quickly. I was most surprised at the number of people who died and the mass of white graves everywhere. The contrast between the German graves and the British ones was also surprising because it definitely showed how much the Germans must have been hated at the time.”

“Going through the trenches helped you realise just how grim life must have been for some of these soldiers. The saddest thing for me was visiting F. E. Clark’s grave because he was only 17, which is something I can relate to.

I think the most surprising thing for me was how well kept the graves were. It shows the respect they have for these men who died for us.”

“The saddest thing was the disrespect shown towards the German soldiers in the cemetery at Langemark and the lack of consideration taken when it came to burying them. It doesn’t matter what nationality they are, we all share the same anatomy and the same emotions.”

“Going to the Last Post was the best thing because the Irish Guard were there and it was nice to be there. Visiting F. E. Clark’s grave was the saddest thing because he was very young when he died and some of the pictures / photos from the Battlefield were depressing.

I was most surprised by how close the enemy’s trenches were to the Canadian one at Beaumont Hamel.”

“The saddest, most emotional thing was probably listening to the Last Post and the other music at the Menin Gate. It was really amazing to see so many people silent and listening together. It made me think about all those people who had died and how their family must have felt without them. It made me think about what would happen if the war happened now if our own families had to go off and fight and how much I would miss them.

I think the most surprising thing was seeing the thousands of graves altogether. As these sites were just a small proportion of those who died in the War, it makes you realise just how many people were lost. It wasn’t just the graves, but all the names carved in to the Memorials, which showed me just how horrific this war was.” 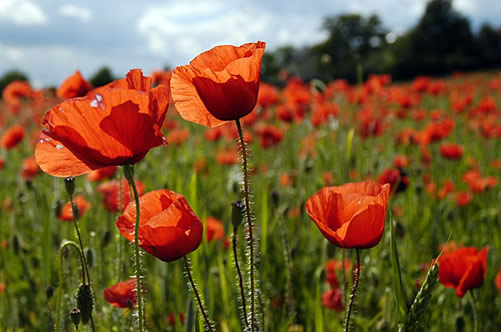