What are the characteristics of world cities and megacities, and how has their distribution changed since 1950?

World Cities
World cities are urban areas with an important role in the global economic system.  World cities have some of the following characteristics:

Megacities
A Megacity is an urban area with a population of over 10 million people.  In 1950 there were two megacities; New York and Tokyo, now there are believed to be nearly 50. 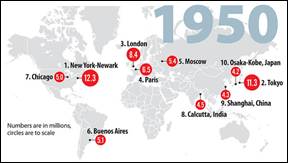 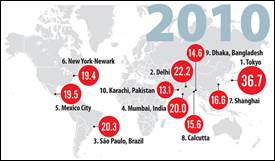 The following website shows projected changes to the distribution of the world’s megacities: