How do urban growth rates vary in parts of the world with contrasting levels of development?

What is urban?
An urban area is essentially a place that has been built by humans.  Urban areas exhibit a range of characteristics:

What is urbanisation?
Urbanisation is the process by which a country changes from having people living in the countryside and working in (mainly) agriculture to the development of cities and a change in the population.

There are five key aspects of urbanisation:

A shift in the economy of a country or a region.  The emphasis moves from farming and the primary sector to manufacturing and the provision of a wide range of services.

A change in the distribution of population. People become more and more concentrated in the growing towns and cities.  Rural-urban migration is a major contributing factor.  Often younger people migrate to the emerging urban areas, who are more likely to have children.

Changes in the size and character of settlements.  Some settlements, particularly those at favoured locations or with access to resources, grow more quickly than others.

A change in the way of life of those people moving into towns and cities. It is not just a change in occupation, there are also changes in lifestyles, values and behaviour.

The spread of the built-up area.  The natural environment is progressively lost underneath an artificial, man-made environment.

How does urbanisation vary around the world?
Most Advanced Countries (ACs) have already gone through the process of urbanisation; the majority of their population live in urban areas and are employed in the secondary or tertiary sectors of employment.

This map shows the percentage urban population in 2015: 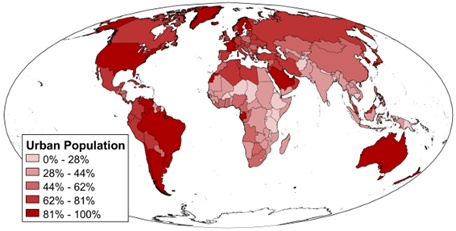