What has been the UK’s political role in one global conflict?

The UK participates in many international organisations to try to minimise conflict and ensure cooperation. For example: 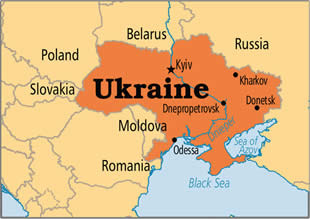 International organisations, of which the UK is a member, have been trying to resolve this conflict:

NATO: trying to resolve the conflict by encourageing negotations between the two sides. In 2015, they also created a rapid response force of approximately 5000 soldiers who were stationed in surrounding countries to deter future attempts by Russia to gain territory. The leadership of the rapid responses force rotates between NATO members and the UK will lead it in 2017 as well as supplying troops and fighter jets.

UN: supporting peace talks between the Russian and Ukrainian leaders and providing aid (e.g. food, medicines and blankets) to people who have been displaced by the fighting. In 2015, the UK gave £15 million in aid to Ukraine, as well as military support and training for the Ukrainian army.

G7: this used to be the G8 but the other member countries forced out Russia in 2014, after it seized Crimea. The member countries, including the UK, have imposed sanctions on Russia e.g. restricting the amount of money Russian banks can borrow and limiting trade with Russia. By threatening the Russian economy, they hope to make Russia agree to a ceasefire and the removal of troops from Ukraine’s borders.