The 2011 census revealed that 9.2 million people (16% of the UK’s population) were aged over 65, this is over a million more than in 2001. By 2015 the amount had increased to 18% of the UK’s population. The UK is gradually becoming a country with an ageing population (high and increasing proportion of people in middle and old age).

The proportion of older people is increasing because: 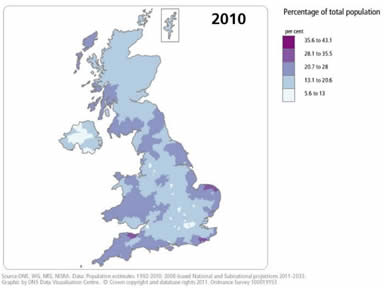 The proportion of people aged 65 and over isn’t the same everywhere in the UK. It’s lower in Northern Ireland and Scotland than in England and Wales. It’s generally lower in large cities, such as London and Manchester, as people often live in cities to be closer to their jobs so a higher proportion of the population is of working age. The percentage of older people is higher in coastal areas, especially in east and south-west England, because lots of people move there when they retire.

To deal with the UK’s ageing population the government has: