Why is demand for food, energy and water outstripping supply? 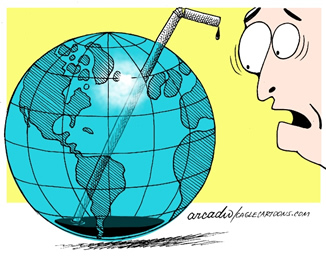 Our planet is rich in resources such as food, energy and water. These are essential for human development. World consumption of resources has increased rapidly over time. Our ability to access resources has improved due to improving technology. As resources have been more accessible, we are able to exploit them more easily and as a result, we are overusing some resources. Earth has a biological carrying capacity (maximum number of species which can be supported) which depends upon population size, resource availability and demand. As technology improves, this carrying capacity can increase. However, this carrying capacity does have a limit and as population rises and we demand more resources, these resources will eventually run out.

The demand for resources is increasing because:

The supply of resources isn’t increasing fast enough because: