What is the distribution and frequency of tropical storms and drought?

Most tropical storms occur between 5 and 20 degrees north and south of the Equator (but not on the Equator itself). This is because the water in these areas is above 27c; further north or south the water becomes too cold. 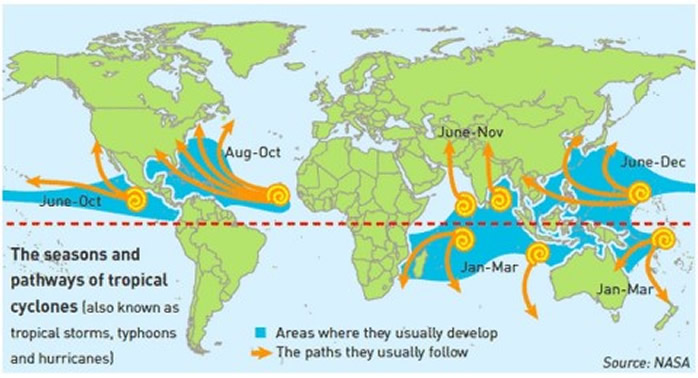 The majority of storms occur in the late summer to autumn (June – November in the northern hemisphere, November to April in the southern hemisphere) as this is when sea temperatures are at their highest.

Tropical storms are given different names around the world:

They all develop in the same way, have the same characteristics and are all tropical storms.

Tropical oceans generate around 80 storms per year. The highest number is in the Pacific Ocean, followed by the Indian Ocean and the Atlantic Ocean is third. The most powerful storms occur in the Western Pacific.

The frequency of storms in the Atlantic has increased since 1995 but there is no overall global increase. However, there is some evidence to suggest tropical storms are becoming more intense. It has been calculated that the energy released by the average storm has increased by 70% in the past 30 years.

Areas most at risk from drought are central and southern Africa, the Middle East, Australia, eastern South America and parts of North America.

The distribution of droughts has changed over time. Since 1950, there have been more droughts in Africa, Asia and the Mediterranean and fewer droughts in the Americas and Russia. The frequency of droughts however, has not altered much in that same time period. Some scientists predict that droughts might become more frequent and more severe in the future due to climate change.