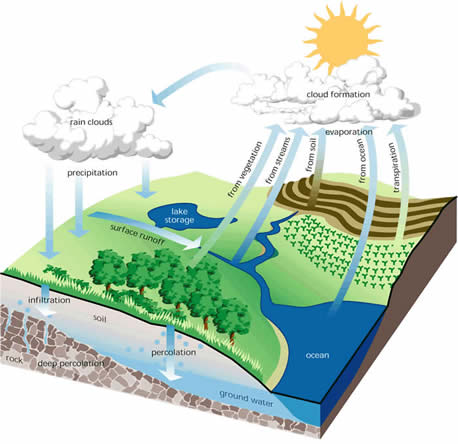 Interception: water being prevented from reaching the surface by trees or grass

Infiltration: water sinking into soil/rock from the ground surface

Surface run-off: water flowing on top of the ground

Water table: current upper level of saturated rock/soil where no more water can be absorbed 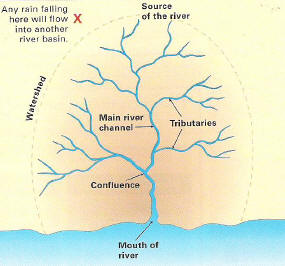 Discharge – this is the amount of water in a river at any given point and time. Discharge is measured in cumecs (cubic metres per second)
Velocity – speed of a river (measured in metres per second)
Hydrograph – a graph showing changes in river discharge over time in response to a rainfall event.
Lag time – the time taken between peak rainfall and peak discharge
Rising Limb – shows the increase in discharge on a hydrograph
Falling Limb – shows the return of discharge to normal / base flow on a hydrograph
Peak Rainfall – maximum rainfall (mm)
Peak Discharge – maximum discharge (cumecs)

Factors affecting the shape of hydrographs: