Extreme environments are susceptible to environmental damage from the development of tourism.

Extreme environments are places where few people live, dure to difficult physical conditions. Tourists are becoming more adventurous when on holiday. One way in which this is sown is the tpes of activities tourists now engage in e.g. white water rafting, cross-country skiing. Also tourists are becoming more adventurous in their choice of destination. Remote destinations such as the Galapagos Islands, Easter Island and the Maldives are now included on a tourist map of the world. Places like this would have once between inaccessible however, with the improvements in air travel and other forms of transport this is no longer a problem.

Adventure tourism is one of the fastest-growing types of tourism in the world. Adventure tourists look for physical challenge and risks. They are often around 30 years old, unmarried and without children, have high-powered jobs and a good income – these trips are expensive. Groups are small and distances great. However, there are enough wealthy individuals with a taste for adventure to allow this sector to grow. It will never be a large sector but in some areas it is increasing in significance. Most companies advertise on the internet rather than by brochure. 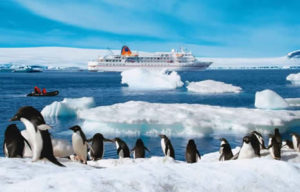 Small-scale tourism began in Antarctica in the 1950s when commerical shipping began to take a few passengers. The first specially designed cruise ship made its first voyage in 1969.

Antarctica is classed as extreme because: 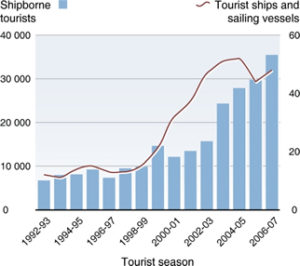 Tourists from the northern hemisphere usually fly to New Zealand or Argentina, taking their cruise ships onwards for one to two weeks. Smaller boats take them ashore at key locations for short visits, mainly to the peninsula or nearby islands. 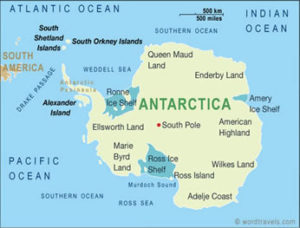 At the moment, tourism’s impact on Antarctica is limited. This is because tourism there is internationally controlled and carefully monitored (plus very expensive; a 7 day trip to Antarctica costs about £25,000). Tourists spend most of their time on board their cruise ships and don’t venture far inland.

With the number of visitors set to double in the next ten years, possible impacts include sea and coastal pollution, littering, damage to flora and fauna. and distruption of breeding patterns – since the peak tourist and the peak breeding seasons coincide. The possibility of bigger ships, helicopters and commercial air strips also threaten the environment. Already large cruise ships with up to 1000 passengers sail to Antarctic. Although their passengers do not visit the continent it would be an enormous environmental disaster should one of the cruise ships hit ice and sink. Unlike the smaller ships they are not ice-strengthened and they use heavy fuel oil, which disperses more slowly than marine fuel oil.

All these strategies have been put in place to allow some visitors to enjoy Antarctica without spoiling it for the future – in other words to manage tourism sustainably.