The global growth of tourism has seen the exploitation of a range of different environments for holiday makers.

According to the World Tourism Organisation (WTO), tourism involves activities that require travel away from home and staying away from home for at least one night.  This not only includes people going on holiday, but also people taking business trips and/or visiting family and friends.  Most people, however, would also include day visits from home to the coast or a National Park under the heading of tourism. 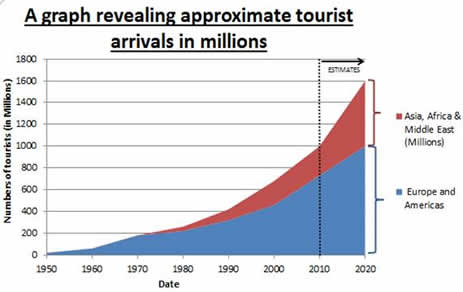 Why has tourism grown?

Many people choose to visit cities to enjoy culture asssociated with museums, art galleries, architecture or shops and restaurants. Cities such as London, Paris and Rome have a huge amount to offer tourists of every age. Major events are also often held in cities and tourists travel to the city to attend the event e.g. London 2012 Olympics. Other cities have unique features that attract huge numbers of tourists for example, many people visit Venice to see its canals.

The natural landscape is also a major ‘pull’ for tourists, particularly mountains such as the Alps in Europe. Mountain areas offer two basic attractions: snow and scenery. This can make mountain areas a year-round attraction with skiing etc in the winter and walking in the summer. The key geographical factors in the mountains are their relief and the climate.

Beautiful stretches of coastline also attract huge number of tourists e.g. the Mediterranean or the Caribbean. In these areas the basic attractions are: sun, sand and sea. The climate is the key geographical factor here and tourists will travel all over the world throughout the year to holiday in coastal resorts.

Globally tourism is big business. Both richer and poorer countries want to promote tourism because it can be a big boost to employment, as well as being a major source of foreign exchange. Increased numbers of tourists can also lead to other knock-on effects: the number and variety of service sector jobs incease, improvements are made in infrastructure and public services, supports for local industries e.g. construction, food processing and handicrafts increases and this all results in incrased local and government tax revenues. Tourism has a multiplier effect, encouraging the growth of services and other businesses. 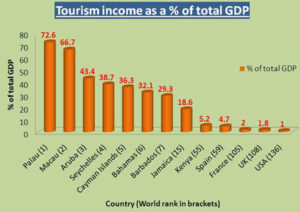 Tourism matters a lot of the world’s poorer countries. The islands of the Caribbean include some of the world’s poorest countries. Some islands, like St Lucia, rely heavily on tourism – it accounts for 37% of their GDP. The economic importance of tourism varies across Europe, some countries receive a lot of tourists so tourism is economically important to them. In the Gambia tourism provides 17% of the GDP, this is very high for Africa where tourism often accounts for less than 10% GDP.