Tsunamis are a specific secondary effect and can have devastating effects in coastal areas.

A tsunami is a huge wave which is caused by volcanic or earthquake activity under the ocean which eventually reaches the coast and creates devastating impacts. For this section of the unit you need to know a case study of one tsunami event and its causes, effects and responses. You will have to know about the 2004 Boxing Day tsunami. 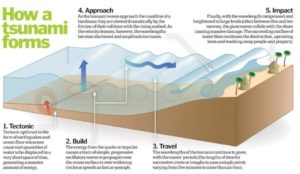 The Boxing Day tsunami happened at 7.59am on the 26th December 2004 and was the result of the Indo-Australian plate being subducted beneath the Eurasian plate 240km off the coast of Indonesia. The earthquake measured 9.1 on the Richter scale according to the USGS and caused a 20m uplift all along the 1,000km fault line.

Explaining the causes of a tsunami

Video of the causes 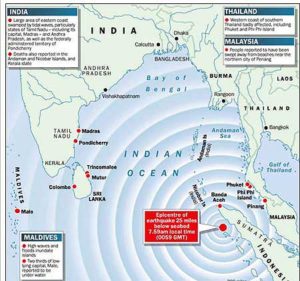 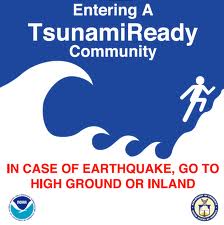