Volcanoes are hazards resulting from tectonic activity. Their primary and secondary effects are positive as well as negative. Responses change in the aftermath of an eruption.

For this key question you need to know about Montserrat volcanic eruption. An interactive guide to Montserrat eruption can be found here which you can use in addition to the information below.

Montserrrat is part of a volcanic island arc in the Caribbean, which has developed at a destructive plate boundary. The Atlantic Plate (oceanic crust) is being subducted under the Caribbean plate (continental crust) as it is more dense. As the Atlantic plate is forced into the mantle it melts creating new magma. This magma then combines with the sea water that has also been subducted making this new magma less dense. It then rises throught the Caribbean plate to form a volcano and a volcanic arc (Lesser Antilles volcanic arc).

In August 1995 the volcano started to erupt smothering Montserrat’s capital, Plymouth, in dense clouds of volcanic ash. Two years of ‘gentle’ eruptions then followed. In June 1997 the biggest eruption sent massive pyroclastic flows (mixture of volcanic fragments, ash, mud and toxic gases at temperature over 500C) flowing down the side of the Soufriere Hills at over 130km/h covering everything in their path. 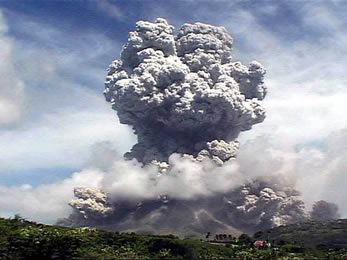 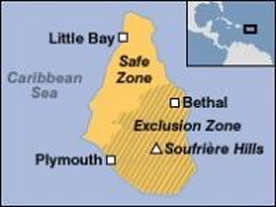 Volcanic eruptions can have both positive and negative impacts.

The Montserrat Volcano Observatory was set up in 1996 and they are monitoring the volcano through a number of methods.