For this section you need to know the case study of one range of fold mountains – the Alps. You need to be able to explain the ways in which they are used – farming, hydroelectric power, mining, tourism and how people adapt to limited communication, steep relief and poor soils. 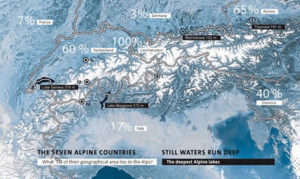 The Alps are located in Central Europe and border Austria, Italy, Switzerland, Germany and France. They were formed by the African plate psuing against the Eurasian plate. As it moved sediments in Sea of Thethys (the geosyncline between the plates) were squeezed upwards to form the Alps. The highest peak is Mont Blanc near the Franco-Italian border at 4810m but many other peaks are also above 3800m. It is the source area for some of Europe’s great rivers e.g. Rhine and Rhone.

Introduction to the Alps video

How do humans use the Alps? 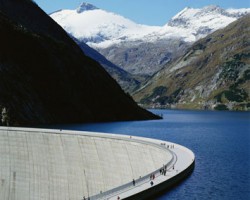 Hydro-electric power: steep slopes, high precipitation and summer melting produce fast flowing rivers and narrow valleys mean that the rivers are easy to dam. This makes the Alps ideal for generating hydro-electric power which then in turn attracts industry to the area. Some electricity is also exported to other regions to supply towns and cities (60% of Switzerland’s energy comes from HEP in the Alps).

Farming: Most farms are located on the sunnier and warmer south-facing slopes. The traditional pattern of farming is a type of dairy farming called transhumance. This is where animals are moved according to the season. In the summer cattle are taken up to the high alp to graze which allows hay and other fodder crops to be grown on the flat land in the valley floor when the soils are at their deepest and most fertile. In winter the cattle return to th farm on the valley floor where they are kept in cattle sheds and stall fed the fodder crops which were grown in the summer. There has been many changes to the traditional way of farming. Cable cars installed for tourism are now being used to bring milk to co-operative dairies on the valley floor each day rather than farmers staying on the alp all summer and turning the milk into butter and cheese (longer lasting). Farmers also buy in additional feed stuffs so that their cattle can stay on the valley floor all year. 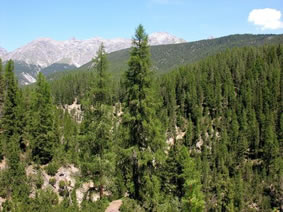 Forestry: coniferous forest cover many of the slopes especially north-facing ones. Wood, as a plentiful resource, has always been the main building material and winter fuel in the Alpine region. Most saw mills are located on the valley floor near rivers. 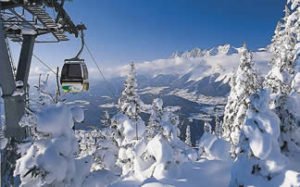 Tourism: the Alps have physical advantages for tourism all year round. In summer walkers and climbers are attracted to the stunning scenery in the area. Theree are large glacial lakes on the valley floors and beautiful scenery with snow-capped peaks. Examples of main summer resorts are Interlaken and Lake Garda. In winter the snow attracts skiiers to the area. Weather conditions are perfect as in between the days of heavy snowfall are many sunny, crisp and clear days. The flatter land on the high level alp allow for easy building of hotels, restaurants, ski lifts and other facilties. Steep sided slopes above the resorts are perfect for skiing amid great mountain views. However, there is a concern that the Alpine winters are warming up and becoming less snowy.

How have humans adapted to living in the Alps?