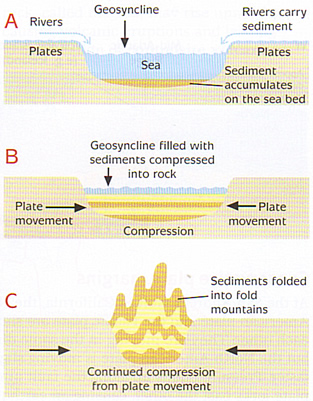 Fold mountains are created at two types of plate boundary.

Over millions of years sedimentary rock (e.g. sandstone, limestone) has formed in huge depressions in the sea called geosynclines. The material has been transported there by rivers. These sedimentary rocks have then been forced upwards into a series of folds as the plates have moved together. Upwards folds are known anticlines and downwards folds are called synclines.

Examples of fold mountains include the Alps in Europe and the Himalayas in Central Asia. 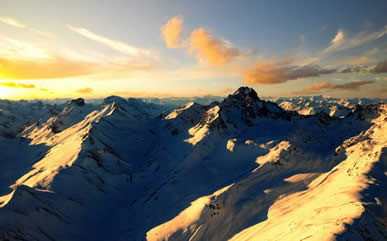 Video about formation and location of fold mountains 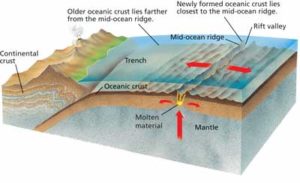 Ocean trenches are associated with subduction zones and destructive plate margins. As an ocean plate subducts beneath another plate (either oceanic or continental) the plates drag each other down creating the deepest part of the oceans.  Examples include the Peru-Chile trench off the coast of South America and the Marianas Trench in the Pacific Ocean off the coast of The Philippines.

Composite volcanoes are usually found at destructive plate boundaries. When the oceanic crust sinks into the mantle and melts it forms magma. As it then mixes with sea water it is less dense so it rises through the continental crust to form a volcano.

Shield volcanoes are found at constructive plate boundaries. As the two plates move apart magma rises up from the mantle. It then rises up through a vent forming a volcano.