Population movements impacts both the source regions of migrants and the receiving countries.

igration is the movement of people to live in a different place. There are several types of migrants:

Why do people migrate?

The reasons why people migrate are usually split into push and pull factors. Push factors are the things that push people away from an area. Pull factors are those that attract people to move to an area. 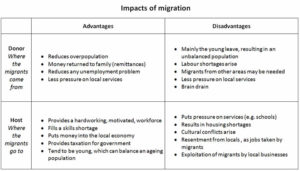 Migration within the EU: Polish migrants move to the UK

When Poland and seven other Eastern European nations joined the EU in 2004 it started a wave of migration to the UK. By 2008, over 850,000 had registered to work in the UK. Many of these migrants were Polish.

Polish migrants moved to the UK to find work. There was high unemployment in Poland at the time. Most migrants were under 34 (85%) and only 15% wanted to stay permanently. Most wanted to work in the UK for a couple of years, earn money and then return home. Wages in the UK are much higher than they are in Poland (in 2006 a Polish migrant could earn an average of £20,000 a year in the UK compared to £4,000 in Poland). 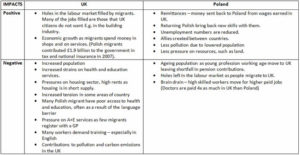 Migration into the EU: Afghan refugees move to the UK

The EU receives over 2 million asylum claims each year. Refugees are often forced away from areas because of wars. In recent years many refugees have come from Afghanistan were there are problems with ongoing conflict, corruption, poverty and unemployment. Many of these refugees went to Pakistan and Iran but some have attempted the difficult journey to the UK. 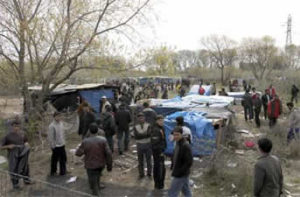 Story of an Afghan refugee

Under EU immigration laws refugees should claim asylum in the first EU country which they reach. However, many of the refugees want to get to the UK (as they say it is a ‘good’ and ‘safe’ country for refugees) and make their way to Calais to try and cross the English Channel. The ‘Jungle’ has built up on wasteland on the edge of Calais. It is a makeshift settlement of homemade tents and shacks, hygeine is very poor. In August 2009, between 700 and 800 Afghans were living there waiting for a chance to cross to the UK (usually hidden in a lorry or train). Early on the 22nd September 2009 the migrants in the camp were arrested and the settlement was bulldozed. Many people hoped that the migrants would be able to reamin in France or be sent home. However, most were just released and made their way back to northern France to attempt to cross to the UK.