An aging population impacts on the future development of a country. 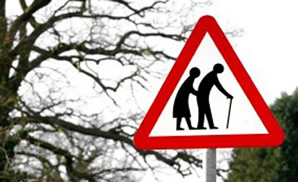 Richer countries also have problems with their populations. Many MEDCs are now experiencing an ageing population (an increasing proportion of old people). It is most noticable in Europe and Japan where birth rates are low. Some countries have even reached the point of population decline and have moved into stage 5 of the DTM.

Why do countries get ageing populations?

The dependency ratio is a measure of the number of working people and those dependent on them.

In 2007, the UK’s dependency ratio was 61, which meant that for every 100 people of working age, there were 61 people dependent on them.

Impacts of an ageing population

Having an increasing proportion of elderly people in the population can lead to several problems.

There are also opportunities in having an ageing population. Younger retired people (i.e. late 60s, early 70s) contribute to the economy still as they are relatively wealthy and spend money on leisure activities. They also spend money on travel and recreation creating jobs in this sector. Many volunteer or still do paid work (so pay taxes). 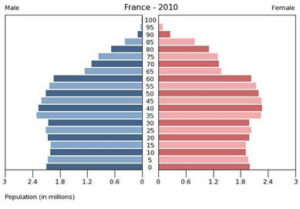 One way of managing an ageing population is to encourage people to have more children. In France they have adopted this policy.

Couples are given a range of benefits if they have more children: