In order to manage the rainforest sustainably a variety of management techniques have been used in Malaysia. Make sure you can explain each of these strategies with specific detail on why it is or isn’t sustainable.

Widespread logging in Malaysia started after the Second World War due to improvements in technology (e.g. chainsaws, trucks etc). The government responded by passing the National Forestry Act in 1977. The Act paved the way for sustainable management of Malaysia’s rainforests and had the following aims:

One of the main initiatives of the 1977 Act was to introduce a new approach to forest management known as Selective Management System. This is recognised as one of the most sustainable approaches to tropical forestry management in the world.

Survey to check what had been felled

Prosecution may result from illegal felling

But, a lack of trained officials to enforce and monitor the system across the country has led to the continuation of abuses and illegal activities. Remedial measures, such as replanting, have not always been carried out satisfactorily. Deforestation is still taking place in Borneo where land is being converted into oil palm plantations. 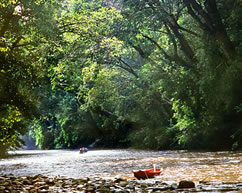 The government to identify Permanent Forest Estates. These are areas which are protected with no development or conversion of land use allowed. Large areas of forest however, are used for commercial logging. Some 10% of the forested land (mainly primary forest areas) have special conservation status ensuring the survival of the rainforest habitats and species.

The Forest Stewardship Council (FSC) is an international organisation that promotes sustainable forestry. Products that have been sourved from sustainably manged forests carry the FSC label. The FSC aims to educate manufacturers and consumers about the need to buy wood from sustainable sources. It also aims to reduce demand for rare and valuable tropical hardwoods. 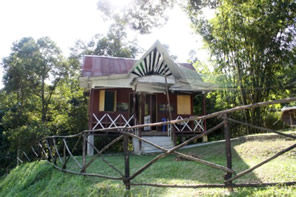 Malaysia has promoted its forests as destinations for ecotourism. This aims to introduce people to the natural world without cauisng any environmental damage. The great benefit of ecotourism is that it enables the undisturbed natural environment to create a source of income for local people without it being damaged or destroyed.

Rainforests are valuable resources which poor countries want to use to expand their economies and increase their level of development. As well as timber rainforests occupy land that could be used for commercial agriculture such as plantations or ranching. Valuable mineral resources such as bauxite, copper or iron may be present in the rock below the forests. To expect countries not use these resources available to them is naive, even though they are important at a global scale. To encourage poorer countries to not develop their rainforest areas various strategies have been used globally.