Tropical rainforest is removed for a range of reasons. This has economic, social, political and environmental repercussions.

Tropical rainforests are increasingly at threat from deforestation. Governments are viewing the rainforests as an untapped resource which can aid them in their quest for economic development. For this section of the syllabus you need to be able to explain the causes and impacts of deforestation with reference to the case study of Malaysia.

Malaysia is a country in south-east Asia. It is made up of Peninsular (western) Malaysia and Eastern Malaysia. Along with neighbouring countries, the natural vegetation is tropical rainforest. nearly 63% of Malaysia is forested and commericla tree crops, primarily rubber and oil palm, occupy a further 13%. Trees and forest cover an area equivalent to the whole of the UK.

In the past most of the country was covered in primary (virgin – unaffected by the actions of people) rainforest. In Peninsula Mayalsia most of this has now gone and little is left on Borneo. Today an estimated 18% of Malaysia’s forest is virgin forest. Malaysian rainforests support over 5500 species of flowering plants, 2600 species of tree and 1000 species of butterflies. Of the 203 species of mammals, 78% live only in forests. 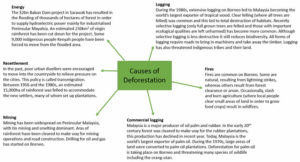