Global ecosystems are known as biomes. The dominant type of vegetation cover usually defines a biome. On a global scale, climate is the main factor which influences the distribution and characteristics of natural vegetation cover. This is because climate affects the growth conditions for vegetation: 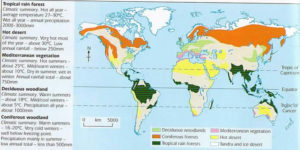 Temperature deciduous forest:  They are mainly found in Western Europe (including the UK) and the eastern parts of North America and Asia. The summers in these areas are warm and the winters cool. The annual temperature range in these areas is low, precipitation can occur throughout the year and there is a long growing season.

Soils:  The most common type of soil is known as brown earth, which is reddish brown in colour. Deciduous trees lose their leaves every year. The fallen leaves slowly decompose which makes the soil fertile. Minerals are slowly washed (or leached) through the soil.

Vegetation:   Deciduous trees loose their leaves in the winter, when the light level and temperature falls. The vegetation in temperate deciduous forests grows in layers. The ground layer is dark and damp – ideal for plants like moss. Plants in the herb layer flower early, before the larger plants grow leaves and block out the light. The sub-canopy layer grows in the spaces between the taller trees, where there’s more water when it rains and more light. Some roots are longer to reach different layers in the soil and reach moisture.

Tropical rainforest: The daily temperature is about 28C. It never goes below 20C and rarely above 35C. It is a very wet climate, at least 2000mm of rain falls a year. This makes the atmosphere very hot and humid. There are no real seasons. Each day’s weather is the same – starting off hot and dry, with thunderstorms and heavy rain in early evening.

Soils:  The soils are red in colour and rich in iron. They have a thick layer of litter (dead leaves etc) but only a thin fertile layer because the leaves decompose very quickly in the humid conditions. The soils are not very good for plants to grow in as nutrients are quickly washed out of the soil because of heavy rainfall.

Vegetation:   The vegetation in rainforests grows in distinct layers and has adapted to the climate and poor soils. Trees are very tall and trunks are thin to reac sunlight. Buttress roots support these tall trees in shallow soils. Lianas are woody vines that climb high to reach the sunlight. Leaves in the tropical rainforest have drip tips to allow rainfall to drip down to the lower layers and shed heavy rainfall easily.

Hot desert:  The climate in the hot desert is characterised by high temperatures. Daytime temperatures can get up to over 40C but at night it can get very cold (below freezing) because there’s no cloud to keep in the heat. There is a large daily temperature range. The hot desert is also very dry with less than 250mm of rainfall per year. There are two seasons – summer, when the sun is high in the sky and it’s very hot, and winter when it is slightly cooler (although still very warm compared to the UK).

Soils:   Desert soils are rocky, sandy and grey in colour. They are extremely thin and can have a crust caused by the impact of infrequent heavy rainfall. Evaporation draws water up through the soil, leaving salts deposited near the surface. The soil is dry but can soak up water quickly when it rains.

Vegetation:   The vegetation has adapted to survive in the harsh desert climate. Some plants store water in their roots, stems, leaves or fruits (these are known as succulents). Some plants have horiztonal root systems, just below the surface, to soak up water when it rains. SOme plants have long taproots (7-10m deep) to reach groundwater. Most plants have small leaves or spines and glossy/waxy leaves to reduce moisture loss. Seeds often stay dormant for years but can germinate quickly when it rains.