The countries of the enlarged EU show contrasting levels of development which have led to a number of political initiatives aimed at reducing inequalities.

In 1957 six countries (Belgium, France, Germany, Italy, Luxembourg and The Netherlands) set up the EU to encourage political and economic cooperation.

The EU now has: 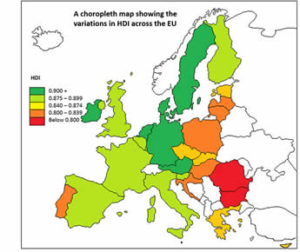 There are significant variations in levels of development in the EU. HDI is high for every member country. All are in the top 60 in the world. Life expectancy is always over 70 year, but it is significant that some are over 80, indicating an extremely high standard of living. GDP per capita is the indicator that really shows the clearest differences. Luxembourg’s GDP per capita is almost seven times higher than that of Bulgaria. The older members have higher GDP per capita than the newer ones. 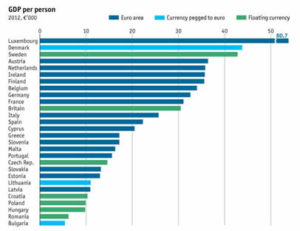 Bulgaria is less developed than Germany because: 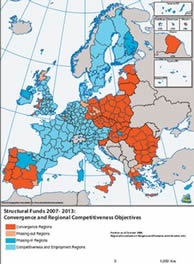 The EU is trying to reduces inequalities within the EU

The ECF cover environmental and transport infrastructure projects, as well as the development of renewable energy. The fund is reserved for countries with living standards that are less than 90% of the EU’s average. 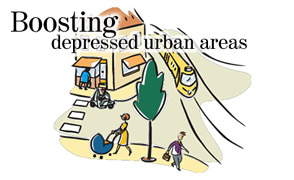 This initiative puts investment into some of the most deprived urban areas of the EU.  It attempts to:

This initiative invests into developing infrastructure, which in turn will make areas more attractive for commercial investment.

This provides subsidies for farmers to keep them in agriculture. This helps Europe provide its food and also helps the survival of rural areas. Many think that this scheme has rescued rural areas, whilst others argue it is a waste of money (agriculture generates less than 2% of the EUs GDP, but the CAP costs 40% of the EU’s budget).

This pays for education and training schemes, focusing on improving the skills of a country’s people. The fund also invests into job creation.

The EIB’s money comes from the EU member countries. Countries contribute according to size and wealth.  In 2004 in contributed €160 billion to regional development schemes. It generates money by investing on world financial markets.