The reduction of global inequalities will require international efforts. 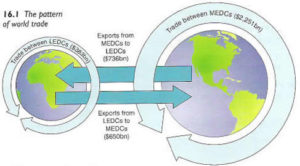 International trade happens when one country sells or exports its goods or services to another. Trade in goods is called visible trade and trade in services is called invisible trade. Exports can earn moeny for the exporting country so they are usually good for development. One country’s exports become another’s imports.

The difference between exports and imports is called the balance of trade and it tells us something about a country’s economy and prosperity. If a country’s exports are greater than its imports, it has a trade surplus and therefore gets wealthier. If its imports are greater than its exports, the country has a trade deficit and therefore gets poorer.

International trade is dominated by MEDCs. The pattern of trade is a problem for those developing countries that depend mainly on primary products:

MEDCs try to control trade by creating barriers to protect their own industries. They do this by using tariffs (taxes on imports) and quotas (limits on the quantity of imports). Free trade is when countries don’t discourage, or restrict, the movement of goods with tariffs and quotas.

Trading groups (or blocs) are groups of countries which join together to increase the amount of trade between them, and the value of their trade e.g. the European Union. Creating formal trading groups mean that member countries can cut the tariffs in place between them – making goods cheaper. However, this often negatively affects countries outside the trading group as tariffs and quotas are still imposed for them.

The World Trade Organisation sets the rules of trade, and it has reduced some issues. But developing countries still complain that trade is dominated by the most powerful countries and their companies (TNCs). If developing countries’ products reach developed countries, the farmers often see little of the final sales price.

Fair trade is an international movement which ensures that producers are paid an agreed minimum price which provides them with a living wage, long-term contracts for security and skills training to develop their businesses.

Debt abolition is when some or all of a country’s debt is cancelled. This means they can use the money they make to pay back the debt. For example, Zambia (in southern Africa) has $4billion of debt cancelled in 2005. In 2006, the country had enough money to start a free healthcare scheme for millions of people living in rural areas, which improved their quality of life. 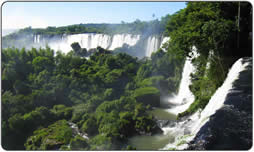 Conservation swaps: (debt for nature swaps) are when part of a country’s debt is paid off by someone else in exchange for investment in conservation. For example, in 2008 the USA reduced Peru’s debt by $25 million in exchange for conserving its rainforests. 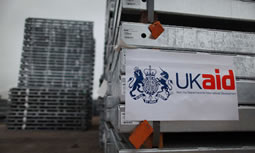 Aid is when a country receives help from another country, or an organisation, to help it to develop and improve people’s lives. Aid can take several different forms:

Type of aid Definition International aid The giving of resources (money, food, goods, technology etc) by one country or organisation to another poorer country. Governmental aid The amount of aid given is decided by individual governments. Bilateral aid Aid given directly from one government to another. Multilateral aid Aid provided by many countries and organised by an international body such as the United Nations (UN) Voluntary aid Aid given by non-governmental organisation or charities Short-term emergency aid Aid provided to help with unexpected disasters such as earthquakes or floods Long-term development aid Aid that is directed towards continuous improvement in the quality of life of a poorer country

Aid can bring many positives but also some negative impacts for the recipient country (the country receiving the aid). 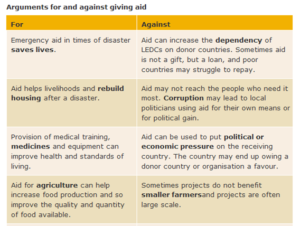 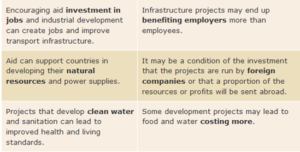 WaterAid in Mali Cahora Bassin Dam, Mozambique What type of aid has been given?

What is the main focus of the development project? Pilot scheme in the slums surrounding Mali’s capital Bamako, aims to provide clean water and sanitation services to the poorest people. WaterAid have financed the construction of the area’s water network and is training people to manage and maintain the system. They are also educating locals about hygeine and sanitation. The dam was begun by the Portuguses government of Mozambique in the 1960s but was only completed in 1997as civil war had prevented construction. It is the 2nd largest HEP scheme in southern Africa and has 5 huge hydro-electricity turbines. How does the project aim to improve people’s quality of life? The combination of safe water, sanitation and hygeine education improves people’s health meaning that they are healthy and can go out to work and school. This means people are better educated and earning more money than before. They can then use this to improve their own quality of life and the government can use the tax income to help the country develop further. By providing electricity people would be able to increase productivity in their work and it would have also improved quality of life as they could light their homes and use electricity for cooking. Increased productivity would help the country develop economically. How successful has the project been? Very successful, there has already been significant improvement in the general health of the community. Not very, only 1% of Mozambique’s rural homes have a direct electricity supply. Most of the electricity is sold to South Africa which makes money for the Mozambican economy but does little for the citizens. Some success has been experienced but with more careful control much more could be achieved. Is the project sustainable? Yes, they have trained local people to manage and maintain the system so they won’t have to rely on WaterAid in the future. It could be more sustainable if more local people were to benefit from its electricity supplies. The potential environmental damage also poses threats to sustainability. Are there any problems with the project? It is only helping people in the slums of Bamako but by training local people to manage the system themselves this means that WaterAid can move on and help other areas. Environmental damage – river flow is low because so much water is held in resevoirs. The shrimp fishing industry in the lower valley has been almost destroyed.