Rising sea level will have important consequences for people living in the coastal zone.

Sea level is rising due to global warming. Sea levels are rising by about 2mm per year (and by about 20cm over the century). It’s predicted to rise by between 18-59cm by 2100.

Global warming has two effects that cause sea levels to rise:

Coastal flooding in the Maldives – video

Which country will be underwater in our lifetime? video 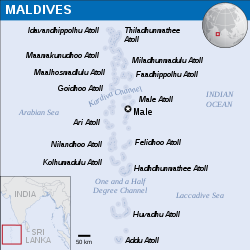