The coast is shaped by weathering, mass movement, erosion, transportation and deposition.

Chemical weathering is the breakdown of rock by changing its chemical composition. Carbonation commonly happens in coastal environments. Rainwater has carbon dioxide dissolved in it which makes it a weak carbonic acid. This then reacts with rocks that contain calcium carbonate (e.g. limestone) and the rainwater makes the rock dissolve.

Mass movement is the downslope movement of rocks and loose material. It happens when the force of gravity on a slope is greater than the force supporting it. Mass movement can causes coasts to retreat rapidly.

There are four types of erosional processes on a coast:

Attrition: rocks and pebbles being carried by the water crash against each other, wearing them down to become smaller, rounded pebbles.

Solution: chemical erosion of the rocks by the slightly acidic water especially, chalk and limestone.

Hydraulic Action: water forces air to be trapped and pressured into cracks in the rocks. This constant pressure eventually causes the rocks to crack and break apart.

Waves transport material in four different ways (the same way as rivers do).

The amount of load being carried depends on:

Waves transport material along the coast by longshore drift. 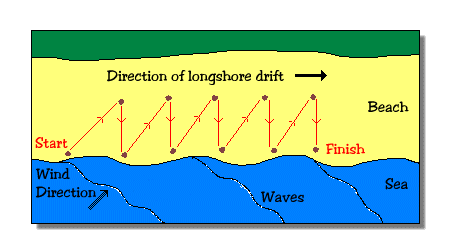 Deposition is when the waves ‘drops’ the sediment which it is carrying. This happens when waves lack sufficient energy to transport the load it is carryingThe amount of material that’s deposited on an area of coast is increased when:

There are two main types of wave: 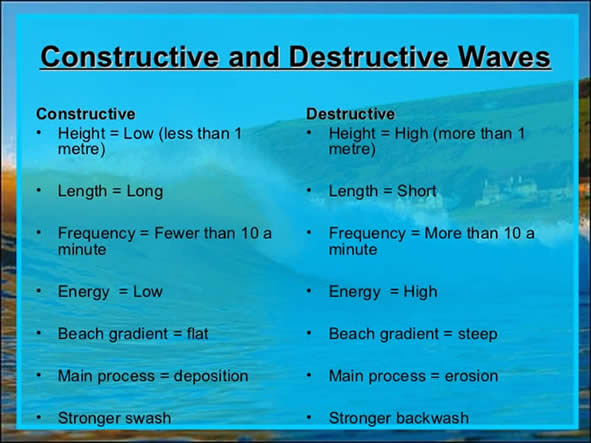