What has influenced Ethiopia’s development?

Ethiopia as once known as Abyssinia and is one of only two African nations to avoid significant European colonisation. Italy colonised Ethiopia from 1935-41. The Italians invested in highways, rail and power however, development was set back after WW2 due to the conflict, loss of life and instability that followed.

The Ethiopian monarchy was overthrown by a coup in 1974 and the Derg, a communist military government came to power. At least 1.4 million people died in the civil war and the Derg government remained in power until 1987. 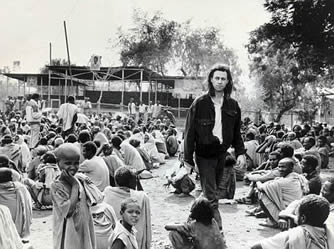 The period 1977-78 became known as the Ethiopian ‘Red Terror’. During this time the Derg government grabbed huge areas of land and evicted owners leading to migration, refugees and economic decline. In 1984-85 the government persued a strict policy on agriculture but productivity declined. From mid-1980s Ethiopia suffered severe drought and eventual famine. The 1984-85 famine (inspiration for the original Band Aid ‘Do they know it’s Christmas?’ song) killed a million people in just a year due to drought and high food prices. International agencies became involved and $2000 million in food aid was delivered by charities. Ethiopia has remained food deficient since this time, made worse by continued population growth.

In 1991 the Derg government was removed and Ethiopia became a democratic republic. The new government allowed free trade, lifted price controls and provided farmers with cheaper access to imported fertilisers and machinery without paying tax.

Following on from the Millenium Development Goals the government introduced the ‘Growth and Transformation Plan’. Since 2012, new training programmes and investment have enabled farmers to learn new skills (such as mixing crop types with beans to help soils remain fertile) and increase yields.

The government is stable however, there are some claims that free speech is limited.

Climate and relief both exert an influence on how sucessful agriculture can be. One of the key issues with climate is the unpredictable and unreliable nature of rainfall. Ethiopia is close to the Equator, yet due to the relief and winds, temperatures can vary wildly (lowland deserts can reach up to 60c) and the monsoon season can often fail. This makes agriculture difficult to manage and can slow development as most of Ethiopia’s exports are agricultural.

In many places in Ethiopia, inaccessibiliy, water shortages and infestations of disease carrying insects such as mosquitoes and tsetse flies prevent the use of potentially valuable land. As a result, agriculture has remained at a subsistence level until recently. Eastern areas esepcially suffer from drought when rainfall is limited and unreliable, and this has led to farmers over-farming or over-grazing the remaining land, leading to soil erosion and desertification (where areas becomes dry and desert-like; a problem which is a cycle of decline). This makes the soil less productive in the future.

Although it is a nation which often suffers famine and drought, Ethiopia is one of the world’s main producers food; but for export not for locals. Recently, the more productive land has been bought up by nations such as Saudi Arabia who import food from Ethiopia and are setting up their own farms, leading to Ethiopian farmers losing out. As most food is being exported malnutrition is still a significant issue in Ethiopia.