How are river landforms created?

Rivers have an upper, middle and lower course. Each of these sections have different dominant processes resulting in different features. 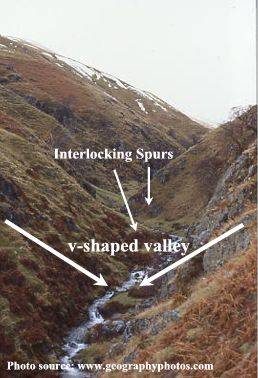 In the upper course erosion is the dominant process creating V-shaped valleys, interlocking spurs and waterfalls.

In the upper course of the river, the river cuts rapidly downwards, as the main direction of erosion is verticall. This causes the most distinctive river feature, the V-shaped valley. Freeze-thaw weathering and other processes create loose material on the valley sides which are then washed into the river from the steep valley sides during times of heavy rainfall, adding to the material being carried by the river. This means that abrasion can continue to steepen the valley and the river cuts further downwards. Interlocking spurs are created when the river has to flow around an obstruction for example, hard rock.

When a river flows over alternating layers of hard/soft rocks waterfalls can be formed. As the river flows over the hard rock onto soft rock, the soft rock will be more easily eroded. A plunge pool is created and processes such as abrasion and hydraulic action cause further erosion of the soft, less resistant, rock. Over time this creates an overhang which eventually, due to gravity, collapses under its own weight. This process happens repeatedly which means that the waterfall gradually retreats upstream creating a gorge. 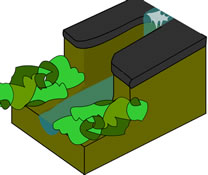 Landforms resulting from erosion and deposition

In the middle section the river has more energy and a high volume of water. Erosion is now mainly lateral and it has widened the river. 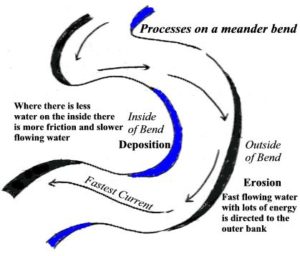 Meanders are bends in the river. They are formed by a combination of erosion and deposition. The faster water travels around the outside of the bend, eroding the banks through abrasion and hydraulic action. This creates a steep river cliff. On the inside of the bend the velocity is much slower and consequently, deposition occurs creating a slip-off slope. 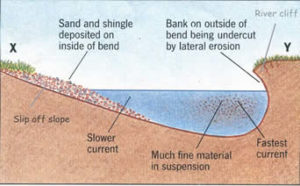 Video on formation of meanders and ox-bow lakes 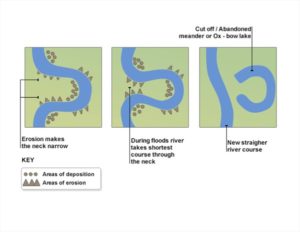 In the lower course the river has a high volume. The river channel is now deep and wide and the surrounding landscape is flat. However, as the river reaches the end of its course, energy is low and deposition occurs. 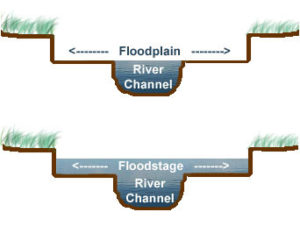 The floodplain is a wide, flat area of land either side of the river in its lower course. It is covered with water during times of flood. Lateral erosion and the formation/migration of meanders have caused the floodplain to get wider, interlocking spurs have been eroded away.

When a river floods onto the floodplain the water becomes shallow and the river’s velocity decreases leading to deposition. 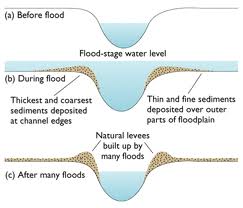 Natural levees form beside a river’s banks. They are formed when the river deposits material as it floods. During a flood the river will deposit its heaviest material first (i.e. closest to the banks). Over the years this material builds up to create a levee. The floodplain also gets built up with the fine sediment to create alluvium which makes the floodplain very fertile.