What are the social, economic and environmental effects of climate change in the UK?

Explore a range of social, economic and environmental impacts of climate change within the UK such as the impact on weather patterns, seasonal changes and changes in industry. The impacts studied should relate to the 21st century. 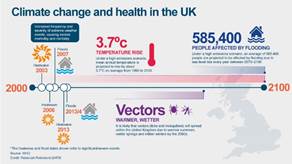 However, there could also be some positive impacts from a warmer UK climate: