What is the range and reliability of evidence relating to climate change including evidence from sea ice positions, ice cores, global temperature data, paintings, and diaries?

There are a number of ways we can measure the change in the Earth’s air temperature.  Some of these measures help us look at evidence of climate change in the past, whilst other measures enable us to look at more recent climatic change.

Evidence of climate change in the past

Plants and animals adapt to living in certain climates.  Evidence of climate change can be seen when the fossils of a plant/animal are found in an area that the plant/animal could not survive in today.  For instance, fossils of the thick-furred Mastodon have been found from Alaska to Florida.

When snow falls in Antarctica and Greenland it builds up (because it’s cold).  The snow turns to ice and traps air molecules inside.
An ice core drills into the deep ice and can show ice build up over many thousands of years. The air molecules can be analysed to calculate the air temperature.

Similar to the way snow builds up over thousands of years, so do sediments on the sea bed.  Scientists can analyse ocean sediments and calculate global air temperature.

Cave paintings on the French-Spanish border depict animals around when the paintings were drawn (over 10,000 years ago).  The paintings are of animals adapted to a much colder climate than currently found in the area.  Diaries and personal records can also provide evidence of climate change.

This map shows variations in global air temperature (2017).  The dark red areas show where
temperatures are much higher than normal.  It highlights where the global temperature is
increasing rapidly. 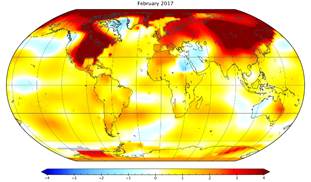 Overall it shows that average global temperatures have increased by 0.85°C.

Valley glaciers and ice sheets have been closely monitored over the last 100 years with relatively accurate equipment and more recently with satellite imagery.  Glaciers and ice sheets around the world appear to be shrinking; the volume of Arctic sea ice has decreased 10% in the last 30 years, in the early 2000’s the Columbia Glacier in Alaska was retreating at an alarming 30m a day.