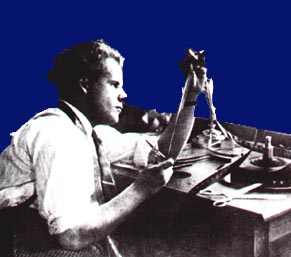 The shot, for Eisenstein, functions as a molecule or cell of the overall montage process.  Like the series of explosions in an internal combustion engine, shots collide and, in doing so, ‘serve as impulses driving forward the total film.’ (7)

Yet, the intensity of the reaction to this collision of shots and, indeed, the direction the collision will take is dependent upon the opposing forces within the shot itself; because, as Eisenstein suggests, ‘conflict within the shot is potential montage, in the development of its intensity shattering the quadrilateral cage of the shot and exploding its conflict into montage impulses between the montage pieces.’(8)

Thus, the shot essentially forms the first molecule of the whole process of montage. It is from the conflicts within an individual shot that the very nature of the ensuing montage process is determined.

Conflict within the frame takes several forms, all of which can be found to be operating simultaneously within one particular shot.   In his writings, Eisenstein identifies five forms of this conflict, each of which are examined below.

In this shot, from The Battleship Potemkin‘s ‘Odessa steps sequence’, we see a number of conflicts operating simultaneously (e.g. conflict of planes, conflict of masses).  Yet, perhaps the most obvious conflict involves the collision between the horizontal lines of the steps and the soldier on horseback and the vertical lines of Odessa’s citizens as they flee the cossacks. 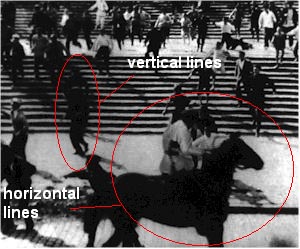 Again we find, in this shot, a number of conflicts operating simultaneously (e.g. graphic conflict, conflict of masses).

However, what this shot most explicitly illustrates is a conflict of planes.  The woman carrying the child is positioned at the bottom of the steps while the cossacks tower over her from above. 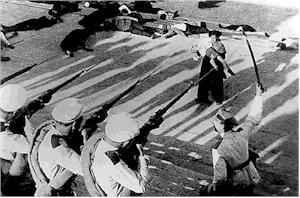 This shot, from October, illustrates a conflict of masses.  The word ‘masses’, in this particular example, refers to the conflicting masses of light which divide the soldiers in the foreground from those in the background. 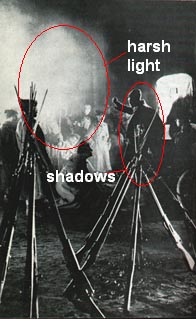 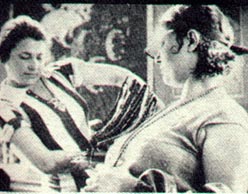 The bridge, foregrounded in this shot, represents a large scale object which conflicts with the ship which can be seen, on a far smaller scale, in the background. 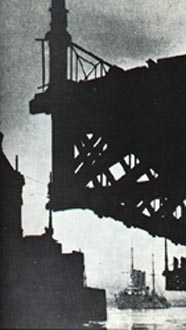