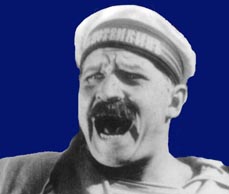 In his essay, ‘A Dialectical Approach to Film Form’, Eisenstein articulated the doctrine which underlies many of his theories relating to montage:

According to its social mission because: It is art’s task to make manifest the contradictions of Being.  To form equitable views by stirring up contradictions within the spectator’s mind, and to forge accurate intellectual concepts from the dynamic clash of opposing passions.

According to its nature because: Its nature is a conflict between natural existence and creative tendency.  Between organic inertia and purposeful initiative.(2)

Applied to cinema, this ‘stirring up’ of contradictions and forging of ‘accurate intellectual concepts’ is achieved via two (not necessarily related) shots which, when juxtaposed, function to create a new state of feeling in the spectator.  A useful equation for this dialectical montage (or what Eisenstein also describes as the ‘montage of attractions’) would be: Thesis + Antithesis=Synthesis.

The juxtaposition or montage of shots can be calculated and manipulated in a number of different ways to achieve a variety of effects.  In Film Form, Eisenstein lists four ‘definite’ categories of montage (overtonal montage has been omitted because, apart from claiming it arises from the conflict between the tone and the overtone, Eisenstein provides only one very vague example of it in operation) rhythmic montage, tonal montage, metric montage and his final, and perhaps most controversial form, intellectual montage (which is discussed on a separate page).

It must be noted however that these categories have been applied with relative indifference.  For example, in a 1929 text Eisenstein uses musical metaphors to provide names for his montage categories and refers to harmonic montage, a term which he later abandons.  This reversal perhaps indicates the difficulty of exhaustively listing every form of montage possible.  However, for the purposes of this site and to prevent any confusion, I will now examine the categories listed in Eisenstein’s own collection of essays, Film Form.

Metric Montage: In metric montage, shots are joined together according to their length, ‘in a formula-scheme corresponding to a measure of music..(3)With the absolute length of the piece already determined, the content within the shot is arranged so that it fits in to the confines of this absolute length.  Thus, tension is created by shortening each shot while preserving the original proportions of the formula.

Rhythmic Montage: While in metric montage, the content was determined by the absolute length of the sequence, in rhythmic montage, the action within the frame is given as much weight as the actual physical length of each shot.  The rhythm of the montage can therefore conflict with the rhythm of the movement within the frame thus generating tension.

Therefore, in the ‘Odessa steps sequence’ in The Battleship Potemkin, it is not only the length of each shot which creates tension but also the rhythmic marching of the soldiers’ feet which, unsynchronised with the rhythm of the editing, ‘violates all metrical demands.’  As Eisenstein himself points out:

The Odessa steps sequence in Potemkin is a clear example of this [rhythmic montage].  In this the rhythmic drum of the soldiers’ feet as they descend the steps violates all metrical demands.  Unsynchronized with the beat of the cutting, this drumming comes in off-beat each time, and the shot itself is entirely different in its solution with each of these appearances.  The final pull of tension is supplied by the transfer from the rhythm of the descending feet to another rhythm – a new kind of downward movement – the next intensity level of the same activity – the baby-carriage rolling down the steps..(4)

Although it may not be readily apparent upon first glance, a tension does exist, in the Odessa steps sequence (see clip opposite), between the slow marching of the soldiers and the quicker beat of the montage.  Indeed, as Eisenstein goes on to suggest, the rhythm of the movement within the frame and the rhythm of the cutting only begin to parallel when the pram, described by Eisenstein as a ‘progressing accelerator’(5), begins its descent downwards.

Tonal Montage: Tonal montage, represents a level above rhythmic montage, and is motivated by the emotional tone of a particular sequence.  Thus, in the sombre mourning sequence (see clip below) following Vakulnichuk’s death in The Battleship Potemkin, we find, in contrast to the rapid cutting of the Odessa steps sequence, each shot lasting around five or six seconds.  With its slower pace, the mourning sequence acts as a caesura, a low key bridge which functions not only to cool the violence of the preceding rebellion but also to prepare for the angry demonstrations from the citizens of Odessa.

The movement of the water, the gliding sea-gulls, the haze which filters through the harbour and the gently rocking boats, all contribute to the sombre tone and (subsequently) languid pace of the sequence. As Eisenstein suggests with reference to the mourning sequence, tonal montage is closely related to several other forms of montage:

In this example it is interesting that, alongside the basic tonal dominant, a secondary, accessory rhythmic dominant is also operating.  This links the tonal construction of the scene with the tradition of rhythmic montage, the furthest development of which is tonal montage.  And, like rhythmic montage, this is also a special variation of metric montage.

The parallels between rhythmic and tonal montage are clear; both forms function in accordance with the actions within the frame.  Indeed, it is important to note that any of these forms of montage can operate simultaneously within any given sequence.