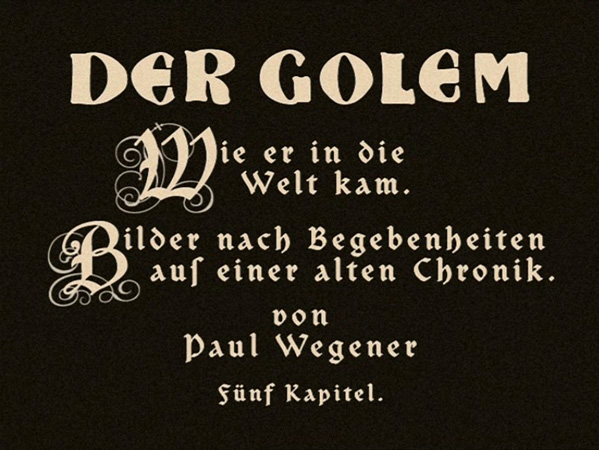 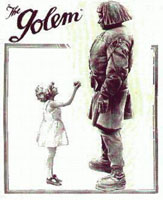 There are 20 prints of the film in different film archives. As a matter of fact, all of them were originated by three different incomplete matrices. The recent discovery of the colour version (5 tintings) in the Cineteca Italiana di Milano has permitted the renewal of the restoration project, which was undertaken by Fondazione Cineteca Italiana Milano, Cineteca del Comune di Bologna and Filmmuseum Stadtmuseum München, which will continue by comparing and collating all the existing materials of the film. 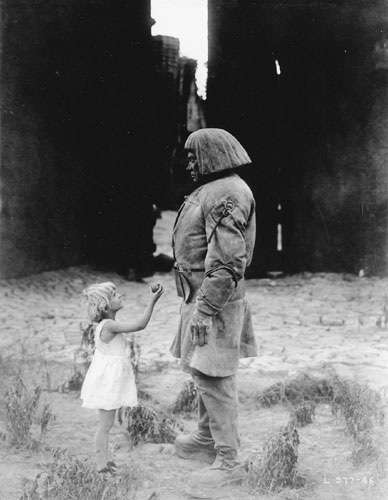 “Actor-director Paul Wegener made three films built around the mythical creature of Jewish legend: Golem was released in 1914, and a sequel of sorts, Der Golem und die Tänzerin, came out in 1917. This is the one film which has survived and is regarded among the landmarks of early German expressionism. … Der Golem’s main virtues are its visuals, particularly Karl Freund’s expressive cinematography. The film is strongest in setting up its premise, using labyrinthine sets and shadowy figures to create an aura of doom and dread. When the mechanics of the story kick in, the film loses some of its suggestiveness and veers into melodrama.
– Tom Wiener, All-Movie Guide

“Of the four extant versions of this perennial horror classic, Paul Wegener’s 1920 version remains the best. Wegener both directs and stars in this extraordinarily vivid, magical, brooding film. His hulking claylike monster is an archetype, and the astonishing, angular, teetering sets by Hans Poelzig are an example of the nightmare world of the occult made breathtakingly concrete.”
– Don Druker, Chicago Reader

“The oddest thing about The Golem (whose subtitle, “How He Came Into the World” distinguishes itself from several other Golem films, a couple of which were also directed by Wegener) is how much it relies on suggestion for effect. For all its lavish production values, it shows us very little in terms of its story’s darker turns. … As danger may lurk in the shadows of the frame, so too does it lurk in the dark possibilities of the tale. The Golem is not so much a horror film as a suggestive piece of fantasy. The film exists in a world where powerful rabbis conjure up spells and see visions of the future, where figures from the past directly alter events in the present. … In fact, it might be rewarding to see the film as an intriguing counterpoint to F.W. Murnau’s Nosferatu …, where the physically frail, though certainly gruesome, vampire has powers that can transcend space, can cause madness and disease. The Golem, physically imposing as he is, is just a large, unthinking brute, at the mercy of those around him, even small children. The whisper-thin vampire and the burly automaton are in a sense the two great monsters of 1920s German cinema.
– Bilge Ebiri, The Film Journal No. 4 / 2002

“Paul Wegener had too strong a personality to be content with merely imitating [Max] Reinhardt’s style. His treatment of the magical lighting-effects found at the Deutsches Theater was to adapt them to the needs of the cinema. From his previous work in natural settings he kept a fluidity of atmosphere which he managed to bring to his studio-made Golem. An airy lightness hangs about the shots of the flower-garlanded children playing in front of the ghetto gates. Wegener uses every one of [Max] Reinhardt’s lighting-effects: the stars glinting against a velvety sky, the fierty glow of the alchemist’s furnace, the little oil-lamp lighting a corner of the darkened room when Miriam appears, the servant holding a lantern, the row of blazing torches flickering in the night, and, in he synagogue, the light trembling over the prostate, indistinct forms wrapped in cloaks, with the sacred, haloed seven-branched candelabra emerging from the darkness.”
– Lotte H. Eisner: The Haunted Screen. Expressionism in the German Cinema and the Influence of Max Reinhardt. Berkeley-Los Ageles-London 1994, p. 56

“Wegener was a cinematic visionary who strived to enhance his films with inventive camerawork. ‘The real creator of the film must be the camera. Getting the spectator to change his point of view, using special effects to double the actor on the divided screen, superimposing other images – all this, technique, form, gives the content its real meaning,’ he said in a 1916 lecture. ‘Everything depends on the image, on a certain vagueness of outline where the fantastic world of the past meets the world of today. I realized that photographic technique was going to determine the destiny of the cinema. Light and darkness in the cinema play the same role as rhythm and cadence in music.’
Carl Boese, who is sometimes credited as co-director with Wegener, was really more of an assistant director. ‘Wegener always preferred to have a craftsman at his side,’ Boese explained. Boese was primarily responsible for finding a way to execute the ambitious visual effects Wegener conceived for the film, such as the floating, smoke-breathing head of Astaroth and dancing flames in the ‘creation’ sequence (which involved complex double exposure, copper wires, burning nitrocellulose and tanks of carbon dioxide).”
– Bret Wood, Turner Classic Movies 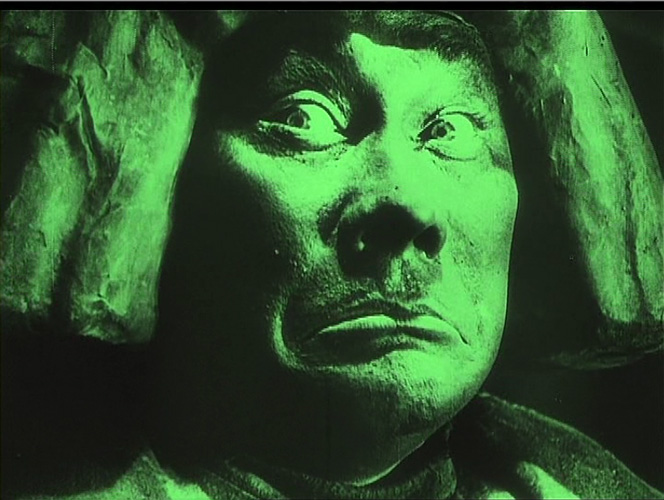 Comment: The Eureka R2 transfer, done from the newly restored and most complete Bologna version, offers a much better quality in every aspect. But this does not mean that the transfer is perfect. There is quite a lot of edge enhancement, and heavy aliasing in movements on screen (see frame 5), possibly because the transfer was done from a NTSC-to-PAL conversion (there seems to be no PAL-speed-up) of the Kino edition (see below), or perhaps because the source material was licensed from Transit Film. Transit so far released Der Golem in Germany only on VHS (what a shame!), and it would be interesting to know, whether they gave the same master to Eureka and Kino for their DVD editions. The background noise of the intertitles indicates an analogue source.
However, this still is a good-looking transfer and by far superior to all the public domain releases, including Elite Entertainment. The latter does not even offer a soundtrack.

Available in the US:

Same source elements licensed from Transit Film as on the Eureka DVD.
“Detail is crisp and clear, and frame damage is minimal. … Textures stand out extremely well, and shadow detail comes through fine. … The sound quality is extremely good…”
Digitally Obsessed

Available in the UK:

The Golem . Dark Vision . 68 min
“… The musical track that accompanies the pictures bears no relation to what happens on-screen and it jars horribly. The picture is horrible too. … It has also been badly converted from NTSC… The extras are a handful of badly duplicated pictures (most of which are used on the cover anyway).”
The R2-Project 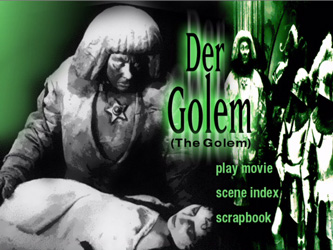 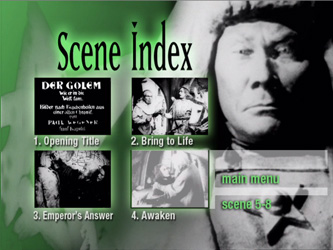 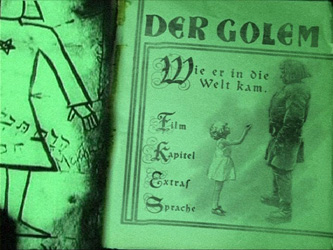 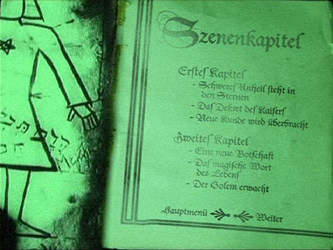 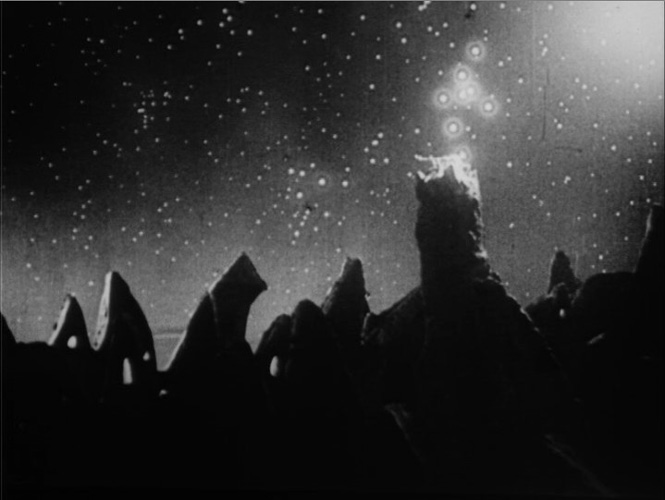 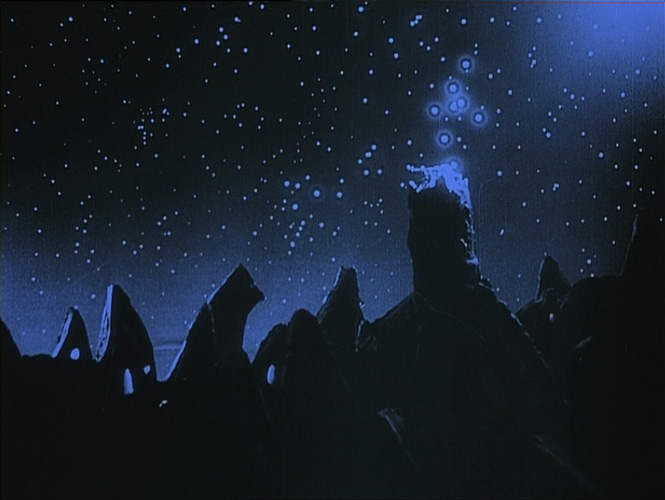 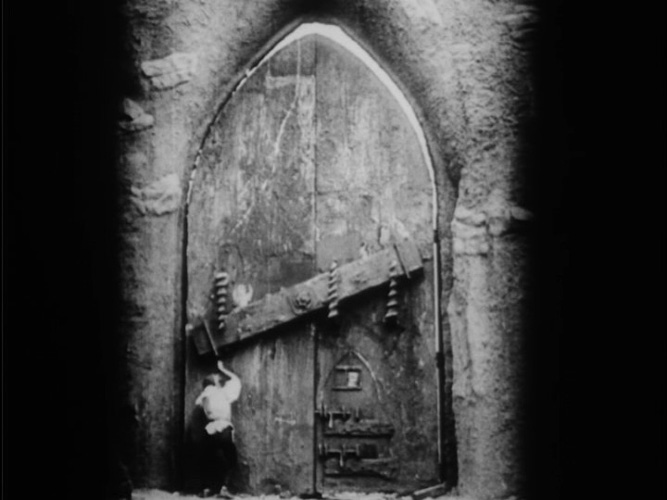 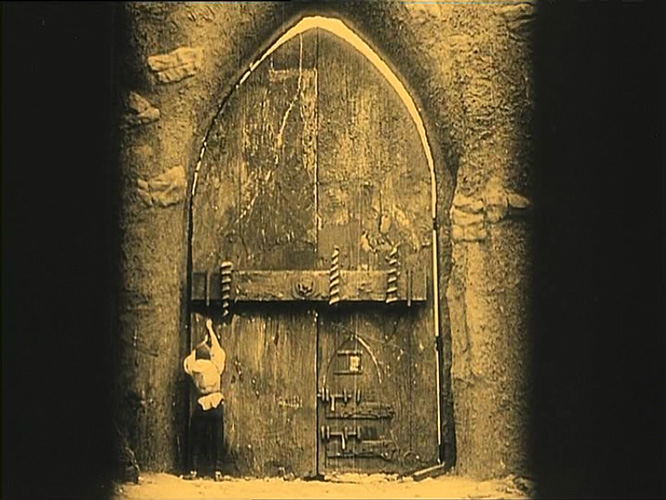 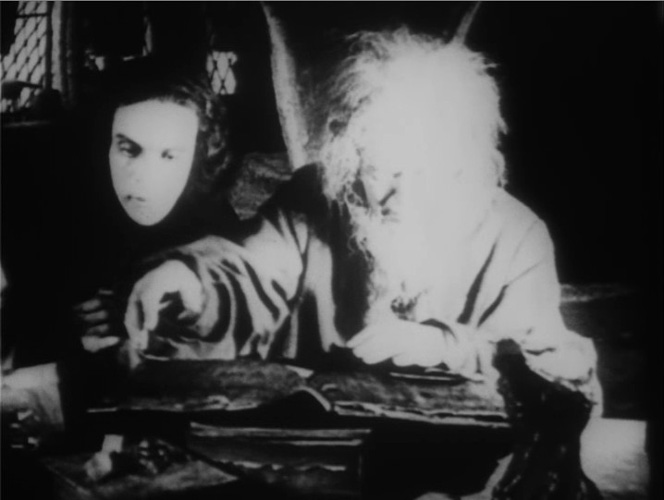 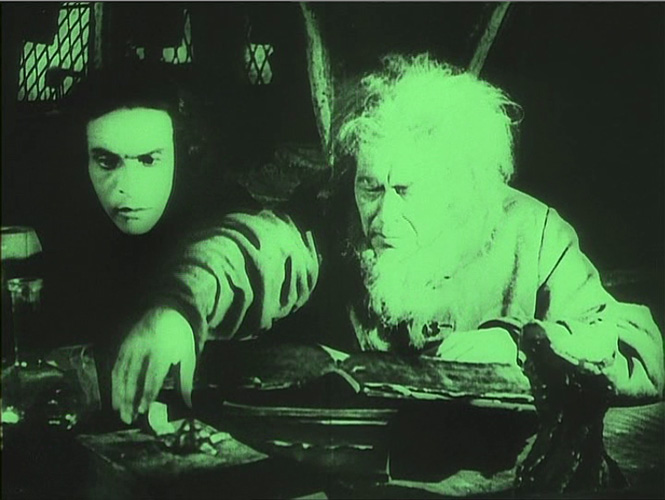 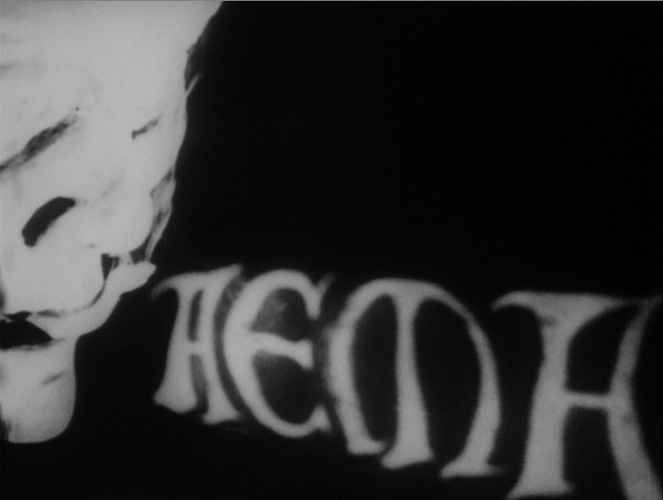 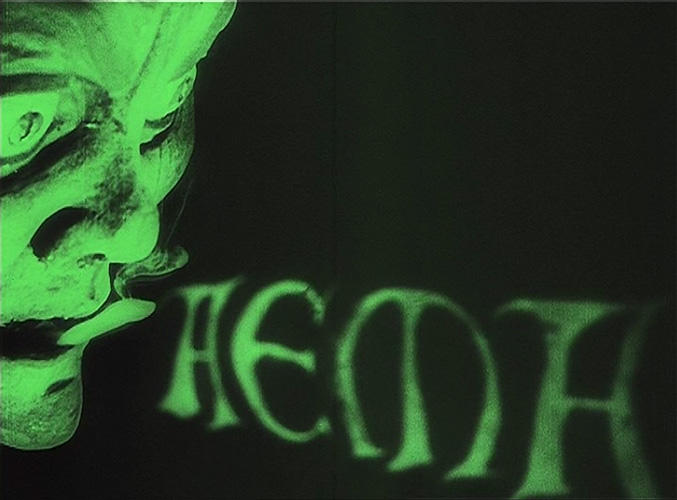 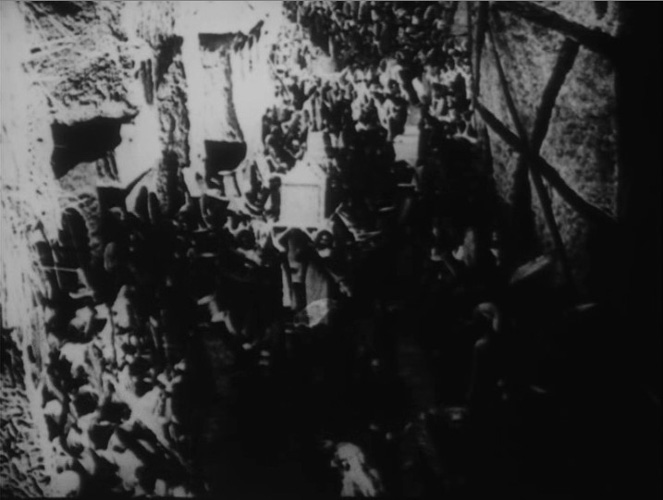 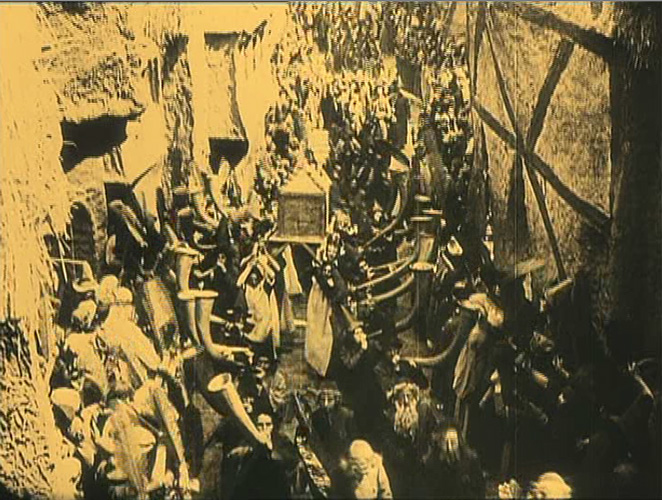 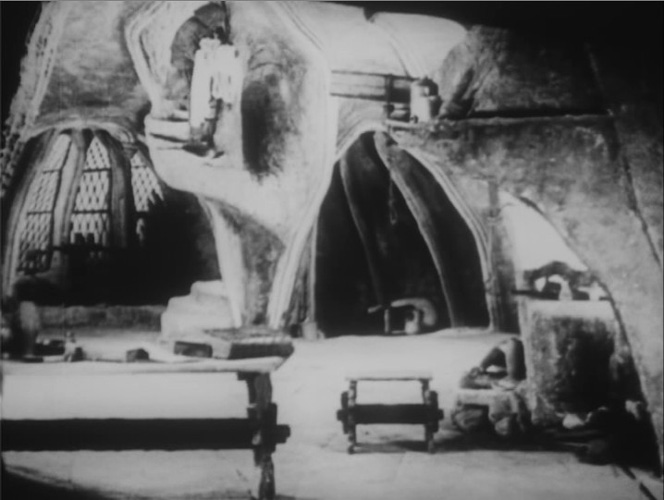 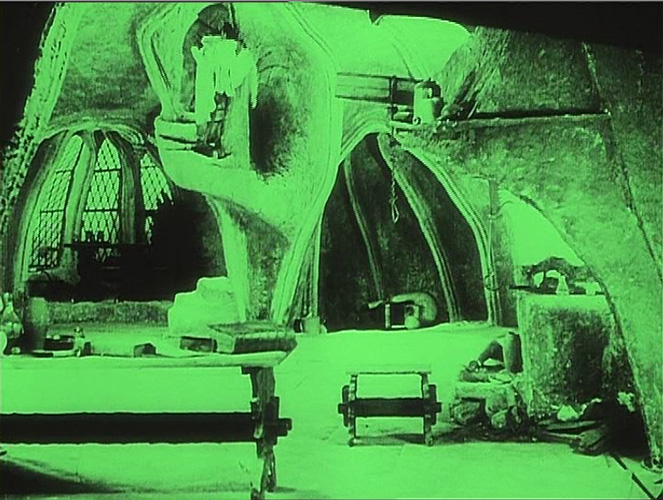 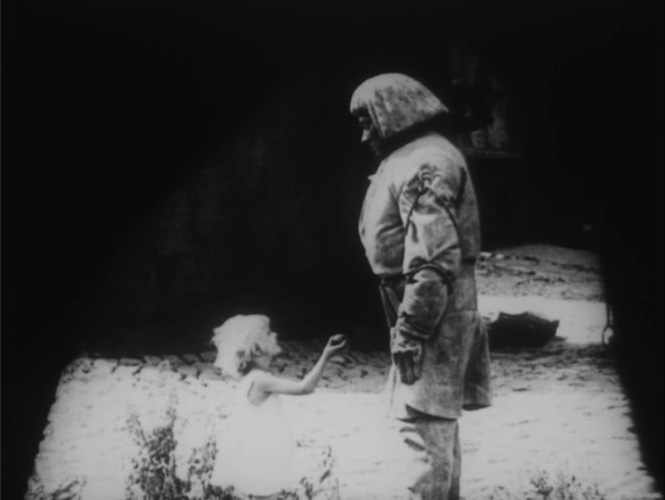 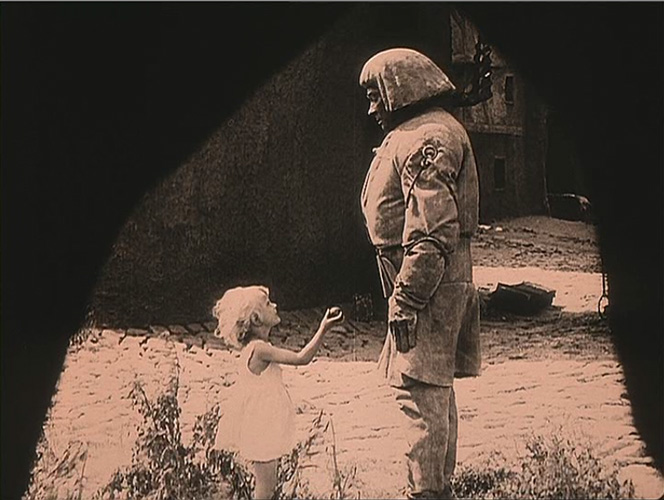 All ChiaroScuro captures are taken under MacOS X.2 using VideoLAN and Snapz ProX. For further methodological remarks see DVDBeaver (click on “Methodology”): “We are not a lab and are doing a good a job as our time and energy permits. Thank you for understanding.”